(only english-speaking presentations from some parts of the walloon edition).

Walloon is the "normal" language of Walloonia; why is it nearly no longer used ?

Walloon, a living language in the 22nd century?

Among the oïl languages, Walloon is probably the most differentiated from French, due to its neighboring situation with Germanic languages.

It is believed that its identity was acquired as early as the 12th century, within geographical limits corresponding to the furthest possessions of the Bishop Principality of Liège (founded in 980). Other oïl languages individualized in the same period in the neighboring areas: Picard in the diocese of Cambrai, Champenois in the diocese of Reims and Lorrain in the diocese of Trier.

The Principality of Liège remained independent inside the Holly Roman Empire until the 1785 French invasion, but it controlled less than a half of the Walloon-speaking territories. The other part was made of feudal entities which were gathered by Princes of Burgundy in the 15th century, then passed to the Spanish, then to the Austrian Empires.

The French regime, though short (1795-1815), established French as the dominant language with no consideration at all for any preexisting “patois”. This linguistic order was supported by the newly formed elite educated in Napoleonian colleges.

In the late 19th century, while opposing to Flemish who wanted official use of their own language, Walloon politicians promoted French as the sole valuable official language for Belgium, apparently unaware of their own non-French identity.

Timid signs of such a feeling have been present since the mid 19th century, where the word “Wallonia” was created, as well as the “Société de Langue et Littérature wallones” (SLLW, 1856).

Walloon identity was emphasised by the Belgian Royal Question (1945-1951), but this arose from political opposition between socialist Wallonia and catholic Flanders. Nonetheless, it led to major reforms of the State which resulted in a largely autonomous status with a parliament (1998), a president and most other elements usually attributed to independent States. But, due to complex relationships with French-speakers from the Brussels region, culture and education are not managed by the Walloon government.

Unlike in Flanders, there is no political party struggling for the independence of Wallonia. Neither was any official role of the Walloon language inside Wallonia ever mentioned.

Walloon has a Celtic substratum (3% of the traditional words), a Latin stratum (70%) and a large Germanic superstratum (20% of words, the remainder being from onomatopoeic stock). Grammar is French-like, with many conservative traits and specificities, with a few Germanic structures.

Phonology is quite different from French.

Due to the historical background, two main, rather uniform dialects, share the central part of the country: Liégeois and Namurois. Western and Southern areas are, respectively, progressively influenced by Picard and Gaumais (Lorrain).

Since school was made compulsory in 1920, the authorities have tried to wipe out Walloon, claiming it was a politically incorrect way of communication. Parents were encouraged to abandon it at home and they accepted the trend.

Since the 1960’s, there has been no more inter-generational transmission of the language. It has survived so far because of belles-lettristic documents which began in about 1600. For two centuries, they were written by nobles and ecclesiastics; in the 19th century, by bourgeois; in early 20th by ordinary people, and in the second half of the century by graduated people from modest origin.

After humorous poems and traditional tails, there was a golden period of suggestive poetry (by so-called “generation 48”). Since 2000, production of novels and other prose texts has been more frequent than before.

Walloon-speaking theater has a particular place in literature, owing to the number of plays – mainly comedies – written and interpreted, and the number of spectators concerned, up to 300,000 per year at present. The maintenance of a Walloon-speaking theater with professional actors (Trianon of Liège) should also be mentioned. However, high quality drama did not meet public agreement. Presently, plays are more often translations or replays than creations, the latter being limited to two or three per year.

Walloon-speaking music is another way for the language to remain popular, with late though constant adaptation to new musical styles. Since 2000, there have been two or three new CD ‘malgs produced every year, in spite of the boycott of Walloon-speaking music by official RTBF radio and TV, except during scarce “dialectal” programmes.

An official status for Walloon was only achieved in the late 20th century, with the 1990 “Décret Valmy Féaux” recognizing it as a “regional endogenous language”. However, Walloon is cited together with 5 other minor regional languages; this does not emphasize its unique position as the only language born in Wallonia and covering 70% of the land.

Corpus planning began at the turn of the 19th century, with adoption by SLLW of the “Feller System”, which, slowly but surely, spread all over during the 20th century. Allowing self-learning, it surely permitted a flourishment of lexical studies (more than 500 publications) as well as quality works of literature. But the Feller System does not provide any standard spelling, as each writer can adapt the graph of each word to note his or her particular accent. Together with the varying regional options to note the long O, or K and S consonants, this results in up to 100 different possible “spellings” for words as simple as “dicåce” (village fair) or “roytea” (kinglet).

Normalisation began in the 1990’s. At first, it was suggested and worked up by personalities and official instances. But strong opposition of academic dialectologists (1996) discouraged militants to adopt the trend. Since 2000, advances in unified corpus of “rifondou walon” (the appellation of normalised orthography) has been achieved by a few members of the NGO “Li Rantoele”. Their skills in various languages and in computer science has allowed such noteworthy achievements as Walloon Wikipedia (since 2004), Walloon Wiktionary (since 2009) and “Diccionnaire di Tot l’ Walon” (database on line since 2010, still being completed).

The standardization process was largely based on the experience of other minor languages such as Swiss Romansh, Breton, Occitan or Poitevin-Saintongeais. The majority form was preferred when possible (tchambe 90% <> tchombe, tchan.me, cambe 10%). But this was seldom the case, because of large dialectal variation. Use of central forms was not promoted (as in Romansh or in Luxemburgish) because the richest and oldest region of Liège is out of the geographical centre of the language. The use of diasystemic graphs was chosen to keep the main characteristics of Liège dialects as pronunciation options. These graphs where often found back in old spellings (archigraphemes).

Other techniques which were used to establish the “rifondowe” (normalised form) included:

Rifondou Walon also adopted some linguistic reforms proposed prior to it, like severe reduction of diacritics and management of the intervals following apostrophes.

As one of the main workers of the Walloon normalisation, it can be worthwhile for me to give you a summary of my own relation to the language.

I was born in 1953, and I grew up in a family where Walloon was spoken between all members (children, parents, grand-mother). In my village, most adults and boys of my age (but not the girls) spoke Walloon. This situation, no longer usual in that period, was to change abruptly a couple of years later.

I lived that diglossic state during my whole youth, French being the educational language. After graduating as a veterinary surgeon in 1977, I went to work in Morocco. There, I realized that my mother tongue was not the colonial language of that country. This was clear for our Flemish fellow countrymen but not for us, the French-speaking Walloons. Why had we abandoned our identity language, without even teaching its existence at school?

From this enlightening realisation (1980), I spent a great part of my leisure time studying Walloon, then became a writer (poet and novelist) and a self-made researcher in that language.

The first contact with other “waloneus” (Walloon language activists) taught me that they were not ready to use Walloon in science, politics or in any field but in literature and theatre. Not even for oral communication between them; let alone for linguistic studies formulated in Walloon.

Fortunately, in 1993, I met a group of young waloneus who had started the normalisation process. I was very excited with that evolution, and I imagined it would be adopted rapidly by all the militants, as the genuine solution to dialectical variety. In that group, we communicated in Walloon, and my creations of neologisms where welcomed, being in line with their goals for the language. So, I helped them to create the association “Li Rantoele” (the web) and was a main contributor to the eponymous magazine (1996).

Abrupt opposition from a large part of traditional waloneus, - and, amazingly, nearly all the Romanic scholars - did not discourage us from pursuing our goal: to make Walloon a language adapted to all aspects of modern life, as were, we found, such languages as Luxemburgish, Basque, Catalan or Breton. Especially as our opponents never suggested an alternative project for the future of the language, not even giving us any opportunity to discuss the different points of view publicly.

Nevertheless, there were positively neutral personalities (writers and linguists), who adopted some main points from the program of the “rifondeus” (normalized Walloon users) such as Walloon speaking between activists, transmission to children, creation of neologisms, or departing from the classical background of early 20th-century Walloon-speaking villages as a subject for belles-lettres. Production of non-fictional prose, although scarce, appeared in some magazine which used to published only literature.

The greater resistance was noted in the use of normalised spelling, especially the diasystemic graphs not present in the Feller system, as well as in the accent-reduced spelling.

Of course, the life prognosis of Walloon is poor. So it is for some 6,000 languages over the world, the last speaker of one of them dying every 15 days.

But Walloon has some uncommon advantages:

So, as with each human adventure, the survival of Walloon to become a living language in the 22nd century does not seem to me to be a utopia.

Lucien Mahin, in the meeting "Promoting or demoting: the transmission of minority languages from past to present", University of Poitiers, France, 6 and 7 April 2018.

The first novel ever published in standardized walloon.

Walloon (and dutch) from english

A letter by Djan-Pire Dumont to the conservator of the open-air museum van Fornea Sint-Mitchî (in French).

To the memory of today's victims of the Global Apartheid and state terrorism.

The All Saints' Day against Halloween (in walloon).

A poem about the massacre of Chatilla (Lebanon, 1982).

Walloon translation of the Genesis, the first book of the Bible, by Laurent Hendschel.

The social capitalism, from Karl Marx and Leyon XIII to de Gaulle (in walloon).

The yellow pages of walloon. 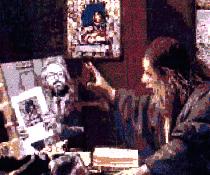 The harmonization (pre-normalization) of ethnic texts presented on this site, 1997-2001.

The corruption in the Third-world and its future consequences. (in walloon)

Studies and reports on walloon. 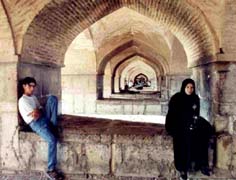 Walloon is one of the languages of the new Mandrake Linux 9.1 version

Old and recent history of Hungary, particularly its links with Walloonia.

May 1940 exodus of  Belgian civilains to South-France because of the German invasion : a testimony of Emile Pècheur.

Marocco, long away from the cliches: from the islamistic attentates to hawk rearing, and the many centuries old "tazotas" architecture.

An industrial plant common in Walloonia from 1200 to 1500, and exported in England : pastel. 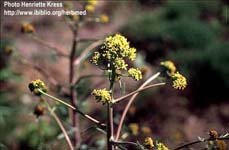 A page on the Basque language.

Other report of journey: Gipsy pilgrimage of September in Hungary.

A journey among Wisconsin Walloon community.

Manifest for Walloonia being responsable of its culture, its education and its research.

Declaration of the linguistic rights of Walloons.

Texts of Walloon migrants in the Wisconsin.

West Africa: towards the debacle ?

Endandered langages: how the Paraguayers thought about neologisms whereas they underwent a genocid war.

Archives: November 1997: the first demonstration for the Walloon language. 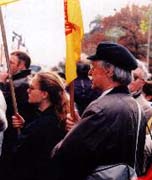 Tribulations of the W.T.O.

The biographic greaving narration a prisoner of the war 1914-1918.

Religions: the old and recent versions of the "Our Father" in Walloon.

Continuation of the Yves Paquet report at descendants of Walloon of the Wisconsin (July 2003).

Concerning the history of languages in Wallonie.

The Walloon: moribund language or fishpond of creativeness?

Religions: The holy office in Walloon.